Simple Logistic Regression, with which treatment will we have more probability of cured animals?

What is logistic regression?

The objective of this statistical technique is to express the probability that an event occurs depending on certain variables, which are considered potentially influential. We will have a categorical dependent variable, which can be dichotomous or polytomous, and one or more quantitative and/or categorical independent variables.

A dichotomous dependent variable has only two possible answers: yes or no, true or false, sick or not sick, cured or not cured, success or failure. These responses are coded with a value of 1 if a certain event occurs or with a value of 0 if this event does not occur. This aspect of the coding of the variables is not trivial, it influences the way in which the mathematical calculations are carried out and we must take it into account when interpreting the results.

In this type of process in which there are only two possible outcomes (0/1), the probability of each outcome being constant over a series of repetitions is distributed under the binomial law.

The simple logistic regression is a statistical test used to predict a single binary variable using one other variable.

The problem and solution using a simple logistic regression

Let us see with a practical example how to perform and interpret a simple logistic regression model.

We are going to check the effectiveness of two alternative treatments on the cure of a disease.

To do this, suppose that we have performed an experiment on a random sample of 40 sick animals, randomly divided into two groups of 20 animals, each of which is given a treatment (A or B). The results obtained in the experiment are shown in the following table:

Before proposing a logistic regression model, we can make a series of calculations:

We can estimate the probability of cure (p) for both treatments:

| is a symbol that means “conditioned on”.

X = 0 indicates that the data belong to the animals assigned to treatment B.

Therefore, the probability of cure for the animals that received treatment B is 65%.

As both probabilities are numerically different, it could seem that the probability of cure depends on the treatment. But before reaching this conclusion, we should ask ourselves two questions: is this dependency generalizable (“statistically significant”)? And how much does the response depend on the treatment (“clinically relevant”)?

In this example, we could also respond from the data in the table by applying the concepts of odds and odds ratio that we explain in the articles of case-control studies in epidemiology (available in Spanish):

In case there were no differences, odds and OR would be 1.

These values ​​are point estimates and therefore, we must also use their confidence interval to indicate the precision of the estimate. Thus, we cannot yet conclude that the probability of cure depends on the treatment.

To perform this analysis, we have used the software Síagro and a database with the following information:

The first thing we have done is log into the application, load our Excel file and access the Prediction / Logistics Models in the control panel.

If we select our variables in the dashboard: 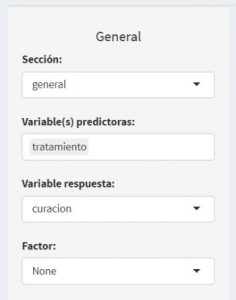 We obtain the following results:

How do we interpret this output?

Firstly, the chart explains the relation between two variables and it is a straight line because it is a linear model.

As a consequence, we say that for the animals in treatment B, the probability of cure is equal to that of no cure.

Similarly, in the row treatment, Pr(>|z|)=0.073; As the level of significance is 0.05, we did not find significance either, so the conclusion is that exp(b) is not significantly different from 1.

This represents that there are no differences in the probability of cure between treatments A and B.

As we have seen, this software allows users to obtain complete analysis and answer such a complex question in just a few clicks.