We use these two terms much more than we think. We try to predict or find out if two variables are related to each other, or if we can explain one through the other.

Before starting the study of these techniques, we must explain what is a dependent and independent variable. We will see it with two examples.

But neither perinatal mortality is a function of fertility, nor vice versa, although they may be related (for example, if an infectious process affects the farm).

In this article, we explain regression in detail and develop a case study to make it easier to understand. As usual, with common variables in the Animal Production industry. If you want to read more what is the correlation, and a practical case, we have it published in this article.

Regression has two forms, the descriptive (we see what “there is”) and the inferential (we draw conclusions).

We have tried to avoid mathematical explanations. However, in regression, it is essential to understand the mathematical logic, since through its knowledge we will be able to perfectly understand the study of linear regression, which will help us to explain later the general linear model that is used for most experiments in health sciences.

Firstly, we are going to explain how, through a series of data, we obtain a fit line, the regression line. To do this, we shall remember the equation of the line and the meaning of its coefficients. The equation of a line is given by the formula: y = a + bx, where a and b are the coefficients of the line:

If we see it graphically, it is very easy to understand (figure 1). 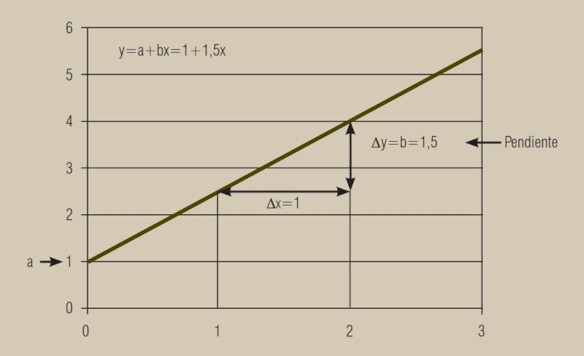 Fit criterion of the regression line

And how to fit a line to a point cloud? What criteria should we follow? We will see it with the minimum mathematical expressions and with a series of graphs.

Imagine the graph in Figure 2. 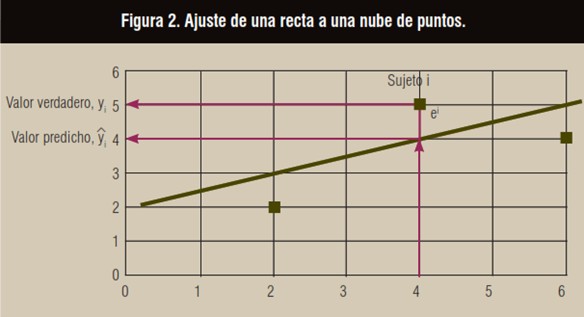 If we draw a line to describe these three points, we could say that the line that appears would describe the three points quite well, at least from a visual point of view. Due to the variability of the data, if this line is used to predict the yi value of a subject i based on its xi value, it is observed that there is a difference ei called residual, which represents the prediction error:

The criterion of the fit line should minimize the set of residuals ei. One might think of minimizing the sum of the absolute value of the residuals, but this condition leads to a very unsatisfactory fit. The generally adopted solution is to minimize the sum of the squared residuals because this criterion has an easy mathematical solution and produces correct fits in most situations.

Let’s see it in an empirical way.

In the following image, we have a graph with the same points as in figure 2, but with two different adjustment lines.

The equations of these two lines are:

■ If we follow an “intuitive” criterion, we can choose when answering the question, which one fits the best visually?

■ If we follow the criterion, what is the sum of the absolute values ​​of the residuals in each of the two lines worth? We must do these sums:

■ Finally, if we follow this criterion: how much is the sum of the squared residuals of each line?

The reason for squaring the residuals is because large differences are magnified, and the least-squares fit looks for a compromise line that avoids very large residuals. This property has the consequence that the mathematically estimated line tends to coincide with the one that the human eye would adjust. We are left with the least-squares criterion (the third criteria).

Now that we have seen the mathematical method, we are going to see how to carry out the regression with Síagro with the following data:

We are only going to explain some of the data that appears in this output, leaving a broad explanation for the next article (but do not hesitate to contact our team if you have further doubts). What would be the equation of the regression line? Just recall that in our case the variable y is y = ADG and the variable x is x = ADC.

That is, the estimated coefficients of a and b are what Síagro (and R) calls Estimate. From the above equation we can say that for each unit of ADC, the ADG increases 0.4986.

But … can we really trust that relation? Or in another way: is the coefficient b different from 0?

This question involves going from description to inference, as we said at the beginning of the article. This is answered with a t-test with null hypothesis b = 0 and alternative b ≠ 0. In this case, the p-value is less than 0, 05 (p-value: 0.000588) and therefore we reject the null hypothesis, that is, b is different from 0.

We will see in the next article further explanations of variability. We recommend you to be subscribed to our newsletter if you do not want to miss it!!