Adding organic iron in piglets drinking water during lactation may be an alternative to parenteral administration of inorganic iron.

Iron stores of piglets at birth are about 50 mg (Venn et al., 1947) and during the first weeks of life piglets double their weight while their plasma volume expands by 30% (Jain, 1986). Iron requirements for the synthesis of enough haemoglobin to prevent anaemia are high, at least 10 mg per day (Venn et al., 1947), but sow’s milk contributes only 1 mg daily (Kleinbeck and McGlone, 1999) and, since piglets have no access to soil, they need an exogenous supplement.

Traditionally, the route used to deliver exogenous iron is parenteral, as iron dextran, iron dextrin or gleptoferron, at doses of 150-200 mg per piglet in a single application during the first four days of life (Egeli and Framstad, 1999). Sometimes this iron also fails to meet the piglet’s needs because of its absorption kinetics, since between 10 and 50% can be retained in the inoculation site (Miller and Ullrey, 1999).

An alternative to meet their iron needs is to supplement organic iron orally, by a single administration as an oral paste or diluted in drinking water, avoiding iron contaminated inoculations —which are related to the onset of polyarthritis (Holmgren, 1996)— and facilitating the management of lactating animals.

To measure the concentration of haemoglobin a blood sample was extracted to 12 piglets per group (one per litter, selected randomly amongst the piglets weighing more than 1.4 kg), and all piglets were weighed individually at 1, 7, and 18 days of age.

Statistical analysis of data was performed using R (R Core Team, 2015) and each batch was considered an experimental unit. Hemoglobin concentration and weight were evaluated using a variance analysis with repeated measures and a mixed model that included, as fixed effects: treatment, sex, the sow’s cycle (primiparous or multiparous), age, and treatment-age interaction.

The average daily gain was evaluated by a variance analysis, using a mixed model that included treatment, sex, and cycle as fixed effects, and the initial weight as a covariate. The litter was included as a random effect on all models.

This study showed a progressive increase in haemoglobin concentration with both treatments. Haemoglobin concentration remained above 8 g / dL, beyond which level clinical signs of anaemia (Furugouri, 1975 and van Kempen, 1987) and production losses (Svoboda and Drábek, 2002) begin to appear, reaching 12 ± 0.3 g / dL at 18 days of age, which is considered within the normal range (Miller and Ullrey, 1999.) 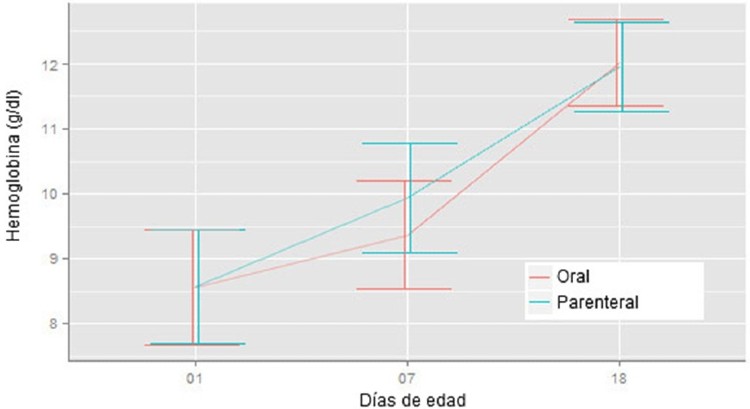 No differences in weight (Figure 2) or growth (Table 1) were observed between piglets treated orally and parenterally (p> 0.05). Jorgensen (2000) noted that when piglets have enough milk, they ingest little water and, consequently, little iron solution. The growth observed in this study indicates that milk production of sows was adequate, and the concentration of hemoglobin in blood suggests that the piglets received proper iron supplementation.

The results observed in this study suggest that supplementation with organic iron in the drinking water of piglets during lactation may be an alternative to the administration of inorganic iron parenterally, supplying an appropriate level of iron to prevent iron-deficiency anemia without affecting the growth and weight of piglets.