Early abortions in sows are caused by several factors and must be under control, especially in seasonal times when the number of fetal deaths increases considerably.

In the pork industry, abortions occur mainly in autumn and have, therefore, the worsening of their well-being, as well as significant economic loss for the farms.

Seasonal abortions are also typical during spring (on facilities with outdoor yards as the sun burns the sows’ skin).

Seasonal abortions occur mainly in autumn due to “the change in the photoperiod that influences the maintenance of gestation together with a poorer body condition of the sow at weaning and the beginning of somewhat colder nights. The most common months for this to occur in the northern hemisphere are September, October, and November. To counteract this type of gestation loss it is necessary to ensure that the hours of light (minimum 14 h) and intensity (min. 250-300 lux) are maintained, while at the same time ensuring a feed intake approximately 30% higher than the maintenance needs, and if possible, having a boar presence daily to maintain higher levels of progesterone.” (Marco, Enric. 2020). 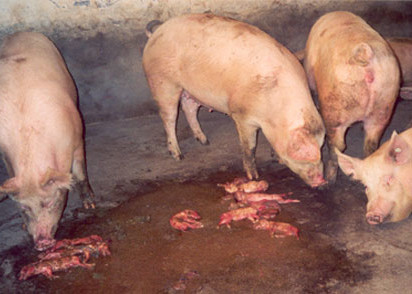 Abortions and micro-abortions in sows

Abortions are the intrauterine death of fetuses (also called << fetal deaths >> or << interruption and premature termination of the sow’s gestation >>) with its consequent ejection.

The difference between abortions and micro-abortions is in the gestation period. For the former, the loss of gestation is between days 30 and 110 while for the latter they occur before day 30.

The percent of abortions among serviced sows should never exceed 2% and when this limit is surpassed, it is when we must consider a seasonal problem or bad physical and/or environmental conditions.

Diagnostic and causes of seasonal abortions in sows

Before the 30th day of gestation, there is no bone formation, so it is reabsorbed. Thus, reabsorption occurs from the first week to the third post-mating week with a return to heat.

We begin by defining the problem: When do sows abort? Are abortions occurring above normal levels? In that case … How much? Is it seasonal? What is the incidence pattern? Is there some kind of relation with other variables?

Abortions often cause scaremongering. However, we must bear in mind that during the first days of gestation – before the calcification process – it is possible to have embryonic losses. These are not observed since a reabsorption phenomenon subsequently occurs and they generate a repeated bristle (what we commonly call “cyclical”, “cyclical” or “empty”).

During the second week, hormonal changes are also very common and have a direct impact on gestation. A very notorious effect is the change in the corpus luteum that produces high levels of progesterone and can lead to miscarriage

We must avoid moving the sows in the first 35 – 40 days of gestation, as well as covering sows in a catabolic state (when they have less than 10mm of backfat thickness).

There are many factors that can provoke abortions, although we can highlight the following:

How to distinguish infections in pregnant sows?

We can categorize two types of infections according to the fetuses’ conditions:

Some of the symptoms of disease in pregnant sows can be:

We must always take care of our animals, although we must pay special attention in the critical months that for assignable causes possible to control their well-being is seriously impaired.

To study the causes of abortions, as we have seen, is a prior and complex action. Two interesting articles of how two groups of professionals dealt with this problem and considered multiple indicators to solve it.