To address infectious diseases that can be transmitted from animals to humans, known as zoonoses, there are proactive measures. Although there are very diverse and numerous zoonoses, some of them can be totally prevented by vaccination.

Zoonoses are a serious public health problem worldwide. Caused by viruses, bacteria, parasites, fungi or prions, the symptoms are diverse: from gastrointestinal, respiratory and nervous to be life-threatening.

The importance of vaccination to cope with zoonoses

July 6 was established as “World Zoonosis Day” as a milestone in commemoration of Louis Pasteur, who in 1885 administered the first vaccine against rabies, one of the most serious and notorious infectious diseases in the 19th century.

Today of the almost 1,415 known human pathogenic microorganisms in the world, 61-65% are zoonotic agents.

The close relation between human and animals, as well as a growing commercial, production and mobilization activity have led to a greater spread of zoonotic diseases.

Several organisms, among which the World Health Organization (WHO) stands out, have investigated the reasons that may explain this spread of zoonoses disease. Among all the factors that have influenced, the following are included:

Some zoonotic diseases can be prevented trough an effective vaccination programme

World Zoonoses Day is celebrated for many purposes, one of them is to disseminate the importance of vaccination to cope with those diseases from which we can avoid contagion.

Vaccination is a very important clinical act for the health of animals, people and the environment (One Health approach) and only a veterinarian can and should assess the health of the animals, perform correct deworming and any other action necessary to ensure the immunity.

Thanks to R&D, there are safe, effective, and quality vaccines on market that inoculate a substance (dead or attenuated microorganism, fraction of a virus, …), against which the organism reacts by creating antibodies (defenses). The appearance of A / H5N1 High Pathogenicity Avian Influence and A / H1N1 Pandemic Influence, among others, has made human and veterinary medicine to be united and working together.

It is everyone’s responsibility to apply and disseminate the diagnostic, prevention, control, and treatment measures established for each pathogen in order to ensure a One Health approach, where the health of humans, animals and the care of the environment is treated jointly.

Veterinarians are also responsible in the task of guaranteeing food safety throughout the production chain and keeping a “farm-to-table” control given the alterations that zoonoses can cause in animal production.

The omnivorous diet does not restrict any type of food, including those of animal origin. According to Statista, in 2018 73% of the Spanish population followed this type of diet, so a control of food safety is more than essential (however, although only 0.1% of the population was included in this category , it would be just as important).

Most foodborne infections are caused by zoonoses through the consumption of food or water contaminated with a bacterium, its toxins, or a parasite.

Protecting animals from diseases is a priority to preserve their well-being and that of society.

Antimicrobial resistance (AMR) is a problem for the control and eradication of zoonosis. AMR occurrs when bacteria, fungi and parasites change over time and the medications are no longer effective. Extensive use of antibiotics increases the likelihood that new strains of drug-resistant zoonotic pathogens will emerge that can spread between human and animal populations.

Thus, new ways of treating animal diseases are continuously being investigated, as well as the causes of their appearance to avoid future pandemics.

Prevention is better than cure, and the first involves vaccination, an effective and nutritive diet, rigorous biosecurity measures and following the guidelines given by the authorities for each pathogen. 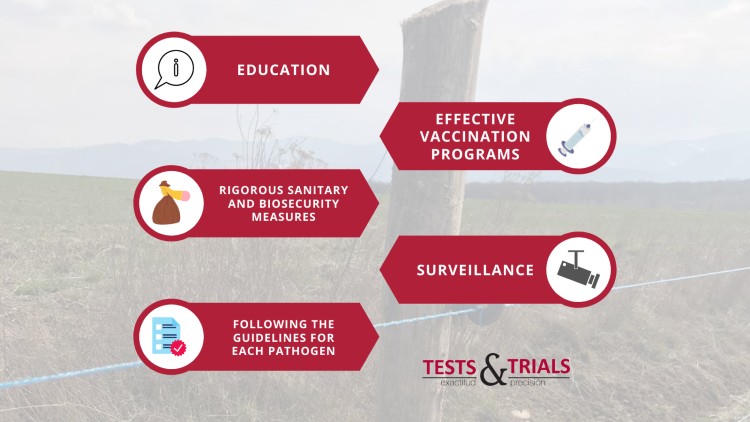 The forms of contagion are very diverse and complex, which is why they are classified as follows:

The European Union One Health 2018 Zoonoses Report published by the European Food Safety Authority and European Centre for Disease Prevention and Control (EFSA and ECDC) highlights that, in 2018, the two most widespread zoonoses in 2018 were the gastrointestinal diseases campylobacteriosis and salmonellosis.

Salmonella is the most common cause of foodborne outbreaks in the European Union (EU), especially since most animals are susceptible to infection. In 2018, almost one in three food outbreaks was caused by this disease, which were mainly related to eggs.

At Tests and Trials, we seek to make food safety a fact and not only a goal. To do this, it is critical to treat the animals with veterinary products (vaccines, feed, …) that ensure their welfare (and so, administrate them correctly)